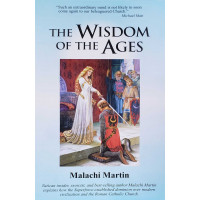 A Bishop’s Exhortation to the Fathers of Vatican II

A Bishop’s Exhortation to the Fathers of Vatican II

Truths that should have been upheld at the Council; errors that should have been condemned; battles that should have been fought. Here is a powerful document from the past detailing what the Conciliar Fathers should have done, but failed to do. Some of the bishop’s chief concerns include: revolutionary thinking infecting the clergy and people; the threat of Judeo-Freemasonry; the evils of divorce and of the separation of Church and State; a false prudence that blinds Catholics to the fact that the so-called lesser evil is always an evil; socialism leading to the worst slavery; Protestant errors among most American Catholics; updating the Syllabus of Errors to include the immediate peril of Totalitarianism; the coming of Antichrist; the scandalous silence of so many priests; the need for Catholics to organize against the Antichristian Conspiracy; and perhaps most remarkable of all, this writing reflects the mind of the Magisterium in its one-time unshaken counterrevolutionary militancy – a spirit not only lost to liberals, modernists and conservatives, but most disheartening of all, lost to the vast majority of traditional Catholics, both clerical and lay, who have no excuse for lacking the knowledge, grace and courage to stand firm with the Church Militant. By far the most important feature of this work is that it neither denies the threat of International Jewry – unquestionably the greatest threat Church and civilization ever faced – nor is it remiss in calling all good men to join the struggle against it. Those who are unsure why it is imperative that Catholic Action concentrate, before all else, on the battle for Christ the King and against the Synagogue of Satan, will find Bp. Sigaud’s exhortation most enlightening.

Tags: A Bishop’s Exhortation to the Fathers of Vatican II, Books