AN UNFORTUNATE BUT NECESSARY DECISION

I deeply regret having to inform you of the decision to discontinue publishing Oportet Christum Regnare. The copy now in your hands, # 19, is our last issue. Be assured, however, that each and every subscriber – including those extra-generous souls that greatly assisted this apostolate by purchasing Gift and/or Life Subscriptions – will be sent A FULL REFUND for the remaining balance on his/her account(s). I only ask that you be patient in receiving your check. It will take some time to cover the enormous expense of reimbursing nearly a thousand regular subscribers and more than 20 life subscribers.

Although there has been a tremendous outpouring of favorable feedback from very many enthused readers since we re-launched the magazine in 2013, nevertheless the bottom line is that the quarterly never reached the point of paying for itself. We lost money on every issue produced these past 6 years, despite a few donations now and then and new subscriptions coming in from all over the world on a more or less regular basis. It wasn’t enough to sustain the ever increasing costs of graphics, printing and binding (FYI, your editor never took a nickel in payment for any of his services). Frankly, we expected at least a small number of those who praised the magazine to actively help promote it. That would have likely made all the difference. But very few actually did. We are grateful to those few, but over-all there seems to be a serious collective deficiency in militancy and apostolic zeal among the majority of Resistance faithful, as among Catholics in general, Traditionalists no less than their Novus Ordo counterparts. At least not enough militancy and zeal to keep an uncompromising publication like ours in circulation. So be it. God knows we did our very best to keep it going, motivated by that most urgent of causes – the Catholic Cause, to include the Resistance, Restoration and Counterrevolution –, personally funding much of the project for as long as we could. We can no longer afford to keep doing so. Our time, energy and very limited finances will now be much better spent elsewhere.

WHY IT STILL BEHOOVES OUR FRIENDS TO CONTINUE SUPPORTING THIS APOSTOLATE

No matter what obstacles are placed in his way, the militant Catholic will always forge ahead, finding a way over or around every roadblock or every mountain he encounters. A setback may slow him down for a time, but it will never stop him or keep him down. Even as the important magazine project has necessarily been laid to rest, other aspects of this apostolate (both Catholic Action Resource Center and the League of Christ the King) are still alive and well, and we expect, God willing, not only to keep them going but to greatly escalate the labors for Christ the King in the coming months and years, for which we will need your continued generous support. We cannot do it without your help. Remember, this is not a profit-based business venture but a dedicated, proven, and very much needed apostolate! Where would the Church Militant be without a militant laity standing on the battlefront along with their militant Bishops and Priests? That’s precisely where we have been since 1969 – now 50 years on the Front Lines. Just how important is this apostolate? Our first book, In Defense of the Faith published in 1974, was the first ever in the English-speaking world to publicly recognize and endorse Abp. Lefebvre and the Society of St. Pius X. Half a century later we are among the very few that are still holding the line of the Archbishop by resisting the Conciliar bent of the neo-SSPX and supporting the four Bishops of the Resistance – Bps. Williamson, Faure, Aquin and Zendejas. And speaking of the Resistance, is there any other single source with as many superb books and booklets that uphold this preeminent cause, the Catholic Resistance – with Fr. Rioult’s The Impossible Reconciliation and the Bp. Williamson biography by Dr. David Allen White, The Voice of the Trumpet at the top of the list? Are we not also among the very few that have dared to publicly expose the greatest threat to the Church and the world, Talmudic Jewry – no less a peril than the Synagogue of Satan? All things considered, have we not therefore by now proven worthy of your support, personal shortcomings notwithstanding? Let us, then, not falter in standing together and fighting the good fight, today as yesterday, as brothers-at-arms, supporting one another, each according to his particular calling!

Some of these projects we expect to commence, keep going and/or expand on, with your assistance, are: (1) This dual-apostolate’s active support of the Bishops and Priests of the Resistance, for example, to mention two of many efforts, by publishing a forthcoming book to be titled The Truth About the SSPX, Bishop Williamson and the Catholic Resistance, and by helping distribute Sean Johnson’s work-in-progress detailing the growing number of incontestable proofs of the SSPX betraying its original mission and mindset by becoming more and more liberal; (2) The League’s “Catholic Action for Christ the King Initiative” – providing yet more resource materials and individualized guidelines and directives, based wholly on Papal teachings, to more than 215 study groups worldwide that have over the years solicited our assistance. Among the resource materials we will soon be publishing is the long-awaited book on Catholic Action, Soldiering for Christ to nicely compliment Msgr. Civardi’s classic study A Concise Manual of Catholic Action which we published in 2000 and have been widely disseminating ever since; (3) The League’s Traditional Catholic Prison Ministry – continuing to provide hundreds of inmates with solid Catholic reading materials and personalized letters in reply to their many questions about the Faith, the crisis in the Church, the meaning of life, man’s transformation in Christ, his hope of salvation, Liberalism vs. Tradition, the power of the Rosary, etc. (4) Catholic Action Resource Center Publishing – books soon to be published under this imprint such as Pope Pius XI’s authentic but never officially released encyclical on Judaism, unknown to most and yet important to the fight for the Faith, as well as The Holocaust: A Catholic Inquiry; and books to be republished to include: (a) a much condensed/updated edition of Synagogue Rising, still in demand; (b) Fr. Edward Cahill’s masterpiece Freemasonry and the Antichristian Movement on the Jewish origins and control of the Lodge, presently out-of-print but too important to remain unavailable; and (c) the 2nd printing of the popular Catholic “Civil War” fiction, Yuma – “Faith and Power Locked in a Deadly Struggle for the Soul of America.”

We will also continue distributing such important volumes as (a) Dr. David Allen White’s superb biography of Bp. Williamson, The Voice of the Trumpet; (b) Fr. Francois Chazal’s outstanding study Contra Cekadam, exposing the dangerous fallacies of sedevacantism; (c) Msgr. Delassus’s riveting short treatise Americanism and the Antichristian Conspiracy (the author commands the holy distinction of having been praised by three remarkable warriors of God – St. Pius X, Fr. Fahey and Abp. Lefebvre); (d) Fr. Rioult’s excellent work The Impossible Reconciliation, mentioned above, exposing the SSPX’s liberalization by contrasting Abp. Lefebvre’s Operation Survival with Bp. Fellay’s Operation Suicide (continuing under the new Superior General); (e) the 8th printing of No King But Ceasar (America’s Catholic origins and her undoing via the heresy of Americanism); (f) the 20th printing of Sacrilege According to St. Thomas Aquinas (on the New Mass) – our longest-lasting best-seller; (g) the great works of Abp Lefebvre, (h) Fr Denis Fahey, (i) Count de Poncins, (j) Msgrs. Jouin and (k) Civardi; and (l) Cardinal Pie; (m) and we will begin distributing Bp. Williamson’s edifying and always timely 4-volume set, Letters from the Rector (presently out-of-print but soon to be reprinted) – and dozens of other authors and books of paramount importance to us today. That’s the briefest summary of the works that we intend to initiate or keep going – again, with your help. So, you see, that “life goes on” even without our quarterly magazine.

Friends have suggested that we offer a credit option instead of a subscription refund. The choice of course is yours. You may opt to receive a refund check or to use the balance on your account to purchase any other items in our Webstore at www.ca-rc.com. Needless to say it would help us immensely if you would select the credit option over a refund check. Although Oportet Christum Regnare will no longer be published, we still have a large inventory of all back issues, which are ever current as far as the major issues are concerned, and they, along with our books, are always very powerful missionary tools for militant and apostolic-minded Soldiers of Christ. Please give this option some thought, and let us know your preference – refund or credit.

Thank you and God bless you for your past, present and continuing support.

Sincerely in Jesus our King and Mary our Queen,

P.S. As we were set to release this letter, several friends urged us to consider publishing a quarterly newsletter in place of the magazine, which would at least keep our readers abreast of the important issues and commentaries from an integrally Catholic perspective that are not so readily available elsewhere. If you have any interest in such a newsletter, and would be willing to support such a venture with a subscription at a fraction of the cost of the magazine, please let us hear from you asap. If enough of you respond favorably to the idea, we might give it serious consideration. Thank you again. 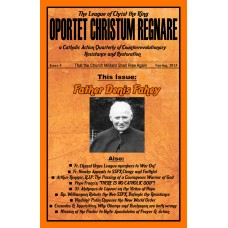 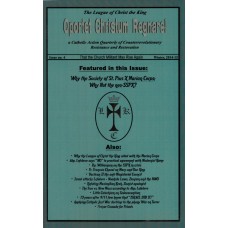